There are events in life that will never live up to our expectations or hopes for them.  The premiere of Mulaney last night was just such an event for me.

I have listened/watched to John Mulaney’s stand-up an alarming number of times, to the point where some of his bits are deeply ingrained into my daily lexicon. (And seriously, if you have not watched his New in Town special on Netflix yet, you need to re-evaluate your life.)  I was trying to remain optimistic about the premiere of his new show, a multi-cam sitcom loosely based on his own life.  Also, it has a (shudder) laugh track.  But I love his stand-up!  I know he’s funny!  I crush on him!  What could go wrong?  As it turns out, a great deal. 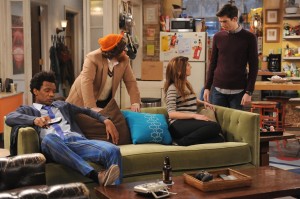 It’s not that the show didn’t deliver some laughs, but all the laughs came from material with which I am very familiar.  It was beyond bizarre to see one of his best bits, a story about going to the doctor for Xanax with unforeseen consequences, being acted out.  The truth of the matter is that Mulaney may not be the best actor, bless him.  He was a bit too stiff and didn’t have that lovable dork swag that he has when he has the microphone stand in front of him.  But then, Jerry Seinfeld was never a great actor either and Mulaney is obviously trying to take a page (if not a whole chapter) from his book, almost to it’s detriment if you ask me.  The comparison may hurt in getting viewers as people will just write it off as a copy but then it may help retain viewers who remember that Seinfeld opened to not so great reviews.

On top of that, no one felt completely comfortable in their roles and the episode was grossly disjointed as they tried to fit include too many character introductions and too many of his popular bits that all had nothing to do with each other.

All that being said, I am a TV comedy pro and I know that every sitcom needs a solid six episodes to really get into it’s groove.  Also, early reports about the upcoming episodes are that the show gets better.  This show was stuck in development limbo for a while and any show is going to suffer from that, so once again, I am going to remain hopefully optimistic and just hope that my heart doesn’t get broken because it did crack a little last night.

(ASIDE: Mulaney fans, was that Ice-T doing the announcing at the beginning of the episode.  Please tell me that was Ice-T.)

I have one hard and fast rule about Fall TV season: no matter how much you may hate a pilot, it is VITAL that you make it to at least episode two. Because usually, the things we hate about pilots get ironed out during the first season. That is what first seasons are for. If the premise is good and the writing is solid, there is always room for hope. But some shows are so fundamentally flawed, so irreparably stupid that a second look only serves to draw out the inevitable and necessary cancellation. Selfie falls, face first, into this category just like Ellen said it would. Let’s break it down. 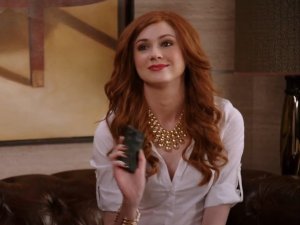 1) Eliza Dooley (Karen Gillan) might be the Worst, and not in a good way. I know that as one of Doctor Who‘s resident red heads, Amy Pond was kind of a polarizing character. And it is totally possible that I am projecting my dislike of The Girl Who Waited onto Eliza, a character with many of the same flaws that kept me from registering with the Amy Pond fan club (selfishness, over-confidence, tends to take others for granted). At least Amy was an interesting character; the most interesting thing about Eliza is her ability to fill two airplane yarf-bags. Which, when you think about it, really set the tone for the rest of the show.

2) Your main character should be redeemable, not reprehensible. By the end of the pilot, we should have had a reason to root for Eliza, and I don’t feel that we ever got it. Most of the attempts to add depth to her character were pretty weak (you mean, she was able to stash her distaste for the office hipster girls long enough to let them clean her apartment, loan her nice dresses, do her hair and make-up free of charge, and generally extend her an undeserved hand of friendship? What personal growth). If you are going to write horrible characters to populate your show, a la It’s Always Sunny in Philadelphia, at least make sure their horribleness is offset by their hilarity. Which brings me to…

3) Traditionally, TV comedies should be, you know, funny. If nothing else, Pilots should be clever enough to give audiences the idea that, even if the rest of the show isn’t prefect yet, the experience won’t be a total loss. Selfie did not make me laugh once, and I laugh at everything. Seriously. Everything.

4) Being unpopular in high school does not a tragic backstory make. Selfie isn’t the first show to try and make not being 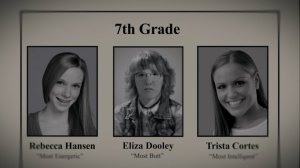 the most popular person in high school a credible excuse for sucking in the present, and it won’t be the last. TV comedies can still be fun and lighthearted even if they delve deeper than an unpleasant school dance experience. But Selfie is just as shallow as it’s main character, which is why I’ll be taking my business elsewhere. Better luck next year, ABC!

I know that not many of you will care, but last night my summer obsession Big Brother ended in the most perfect way with mastermind Derrick taking home the title of Big Brother champ, $575 grand, and the distinction of being one of the show’s greatest players ever.  His game was the perfect blend of calculated, underhanded, subdued, and genius.  It may not have always made for the exciting TV but it made for some pretty dang fascinating TV.  It is gameplay like Derrick’s that gave me no choice but to respect the heck out Big Brother.  Yes.  I just said that.  It’s just so good, you guys.

In other news that brought me irrevocable joy: Frankie Grande did not win the title of America’s Favorite Player, a title which he instructed his sister, Ariana Grande, to tweet about to her fans and have vote for him.  Frankie’s self-aggrandizement and utter disingenuous nature throughout the season drove me crackers, so this face right here when they announced that he was not even in the top three made it all worth it.

I really could go on and on about my love for this show and Derrick’s game, but I have already talked the ear off all my friends who like the show.

Big Brother, I hate to see you leave, but I love to watch you go.  As long as you go with a finale like that.

And Cody, I will miss looking at Cody.

If the Oscars are fangirl Christmas, then Fall premiere season is definitely fangirl Hanukkah. Days and days of network gift

giving, some of which are way cooler than others. In the case of Fox’s new would-be hit Gotham, I still can’t decide whether or not I should hold on to the receipt. Here’s the breakdown:

1) I am really feeling Ben McKenzie as Jim Gordon. He’s got the gravitas of Gary Oldman and the raw sex appeal of Gary Cooper (sorry, I couldn’t think of any other sexy Gary’s).

2) This show isn’t trying to cash in by being too Christpoher Nolan-esq. It’s got it’s own vibe, and I like that.

3) David Mazouz could not be cuter as The Batbaby.

4) I think Gotham will be playing a bit fast and loose with the source material, which is a good thing. This show’s target audience is probably going to be pretty familiar with Batman, and if they don’t mix it up, viewers might just opt to rewatch their Dark Knight collector’s box set in 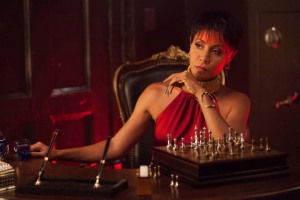 5) Jada. Pickett. Smith. Ever so fierce.

1) In one episode, we’ve met Catwoman, Poison Ivy, The Riddler, The Penguin, Carmine Falcone, and completely wizzed through pretty much all of Batman’s origin story. Too much, too soon.

2) Gotham, like almost every DC blockbuster ever, is a little short on the funny. We get it, you’ve got #Gothamproblems. But cracking jokes doesn’t make your heroes any less bad-ass. Just ask these guys.

Conclusion? Well, I don’t really have one yet. So far I like what I see, but like many another comic book premise, Gotham could go sideways pretty quickly. Luckily, they’ve got a sexy Penguin. I could put up with a lot for a sexy Penguin.

This was originally posted to my Tumblr, but I spent too long on it not to recycle.  That and it makes me laugh.  (Not all gifs are mine. sorry…)

Their getting to know each other was sweet and all, but I was a bit distracted.

When Jamie and Claire go downstairs to get food

“Does it happen every time?”

Probably Dougal from now on whenever he sees Claire and Jamie

The scene with the pearls

By the end of the episode

When I remember that I am not Claire

When my roommate walks in on the fourth viewing

If I had to pick one word to sum up last night’s Emmy Awards, I would have to go with unprecedented. I mean, who could have possibly foreseen that Modern Family would pick up Outstanding Comedy Series for the fifth consecutive time? Or that the dark horse nominee from Breaking Bad (you know, Malcolm’s dad) would take home the award for Outstanding Lead actor? Not to mention all the other left-fielders like The Big Bang Theory, American Horror Story, and Steven Moffat’s little known passion project Sherlock. And while all the wins last night were richly deserved, we decided to recognize all those performances that would otherwise have gone unnoticed. We present to you, our seven readers, the 2014 Femmie Awards.

Outstanding Use of Grocery Bags, Loose Fitting Clothes, and Tony Goldwyn’s Knee to Hide a Baby Bump in a Drama Series 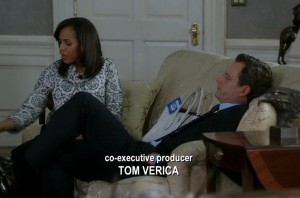 Most Outstanding Comedy Series to Ever Get Cut Down in It’s Prime, Thereby Denying Viewers What Should Have Been Years of Comedy Gold

Subergatory! (Kind of a Win/Lose)

Outstanding Performance by a Smart, Strong, Sensual Woman in a Comedy Series

Outstanding Miniseries that Attempts to Make the Idea of Getting Knocked Up by Patrick J Adams Less Appealing, and Ultimately Fails

We here at Fangirly would like to extend our congratulation to all our winners! You will be going home with… nothing. Statues were not in the budget.

I am an unrepentant Nora Ephron fan.  That’s a fact.  So it would appear that any Nora Ephron fan must now, by default, be a fan of The Mindy Project, especially after last night’s season 2 finale.  The episode paid homage to the three greats: Sleepless in Seattle, When Harry Met Sally, and You’ve Got Mail.

In order to be able to cohesively write about this episode, I had to re-watch it a couple times because much of my first viewing incorporated a lot of pillow squeezing and loud squealing.  What?  This blog has to earn it’s “fangirly” moniker.  I’m just doing my part. END_OF_DOCUMENT_TOKEN_TO_BE_REPLACED