This actually looks pretty fun and, as EW puts it, “seems a lot closer to Zombieland than Twilight”.

Believe me, I’m as shocked as anybody by this week’s object of our Fangirly affection. For most of this season I’ve been crushing on another Mindy Project dreamboat, Danny Castellano (Chris Messina), who is probably the toughest OB/GYN on TV. But this week, it was the show’s adorably doofy nurse Morgan (Ike Barinholtz) who caught my eye. What can I say, I have a thing for clueless guys in scrubs. Am I totally alone here, or is this guy bringing it, in all the weirdest ways?

I watched the pilot of NBC’s Munsters remake Mockingbird Lane on a whim, but less than 20 minutes in I was ready to add it to my DVR lineup. Obviously it was far from perfect, but I thought it showed a lot of promise. That being said, I was devastated when I heard that the chances of NBC picking the show up for a full season was pretty much non-existent. In an effort to quell the fangirlish rage in my heart, I compiled a list of reasons why this show should be given a chance.

Listen NBC, if you’re lucky enough to get Jerry O’Connell, Eddie Izzard, Charity Wakefield, and Portia de Rossi on screen together, at least be smart enough to realize you’re sitting on a comedy goldmine! That’s like locking A. J. McLean, Howie Dorough, Brian Littrell, Nick Carter, and Kevin Richardson in a recording studio and telling them not to make a hit record (look it up, kids). Next time you axe a show after one episode, make sure it doesn’t star some of the coolest people in show business. Nerds.

2) It’s better than the actual Munsters 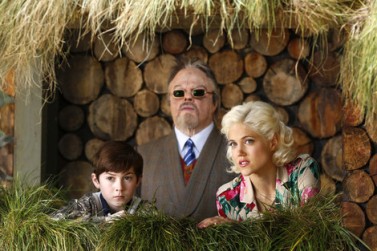 Yeah, I said it. Bryan Fuller and Bryan Singer took a cheesy 60’s sitcom and gave it some actual substance! I for one was totally intrigued by the way the characters interacted with each other. For example, what was the deal with all the thinly veiled tension between Grandpa (Eddie Izzard) and Marilyn (Charity Wakefield)? And how is Eddie going to handle the knowledge that his family tree is populated by things that go bump in the night? All good questions that may never be answered.

Haven’t you heard? Quirky is the new black! Viewers are looking for something different, which explains why ABC’s Once Upon a Time was the surprise hit of last season. And no offence, but your lineup consists of reality shows, family dramas, procedural cop shows and goofy sitcoms. Maybe it’s time to mix things up a little.

What were your thoughts on Mockingbird Lane? Tell us if you think it’s worth saving in our comment section!

First, let’s look at the close runner-up and former champ: Thursday.  It is still fighting a good fight, but where I used to not have enough DVR capabilities to get in everything I wanted and I couldn’t wait to get home and watch it all, I’m feeling a bit more ambivalent.  I enjoy watching 30 Rock and The Vampire Diaries and I still rush home for Parks and Recreation, but this is not the “Must See” night that it used to be.

Dethroning the once great Thursday is the quick and scrappy Tuesday.  It’s appeal may come from the fact that all of the shows I am loving are still fresh and only in their first or second season (with the exception of Happy Endings in its third).  Let’s look at my personal lineup:  Raising Hope, Hart of Dixie, Ben and Kate, New Girl, Happy Endings, Emily Owens, M.D., and The Mindy Project.  All of these have something to get excited about and are showing great promise.

So what night of TV is getting you most excited?  Are you Team Tuesday?

We are officially well into the fall TV season, so we thought we would let you know which of the new shows we are are still digging.

The Mindy Project (Fox): Called it! We told you that this show was going to rule, and so far, it has. Usually, shows about clueless women in the workplace (I’m looking at you, Ally McBeal) really annoy me, but Kaling’s Mindy is funny enough to pull it off. Plus, I feel I’ve found a kindred fictional spirit in Mindy, as she seems to be as rom-com obsessed as I am. Mindy, you totally complete me.

Last Resort (ABC): In all honesty, I can’t be sure if this show is actually as awesome as I think, or if I’m just so freakin’ grateful to have Scott Speedman back in my life that my judgment has been compromised. Time will tell. If you’re not already watching this show, think of it as Hunt for Red October sans Cold War backdrop. Are you asleep yet, ladies? If so, let me direct you attention to this picture of Mr. Speedman. Are you back with me? Good.

Mockingbird Lane (NBC): Honestly, my hopes were not high for this Munsters remake, but thanks to the combined talents of Eddie Izzard, Portia de Rossi, Jerry O’Connell, Charity Wakefield, and writer Bryan Fuller (of Pushing Daisies fame), I’m now totally on board. If I can’t have Ned and Chuck, I’ll gladly take the Munsters.

Nashville (ABC): I have noticed that the only dramas that I am drawn to are crazy over-the-top and scandalous, and Nashville fits in quite nicely.  There are all sorts of sexual politics, real politics, shady business dealings, family drama, bedroom eyes over microphones, and country music (which in and of itself is pretty dramatic).  And I can’t get enough!

Ben & Kate (Fox): Definitely my favorite new comedy.  It is sweet, charming, and hilarious.  I can already tell that I am going to enjoy watching Ben and Tommy and their crazy antcis, B.J.’s dating lessons for Kate, the sibling love/rivalry between Ben and Kate, and the potential couplings that could ensue.  Not to mention, that little girl is  adorable.

Emily Owens, M.D. (CW): It has now been decided and proven that I have to add one schlocky show to my roster with every new season of television (see Hart of Dixie last year).  Regardless of the schlock, I still love to watch them.  Also well documented is my love of complicated love triangles, so it should be no surprise that I am on board with this one.  If this doesn’t sound like it is as much up your alley as mine, watch it at least once for the uncanny resemblance of Mamie Gummer to her mom, Meryl Streep.  It creeps me out sometimes. 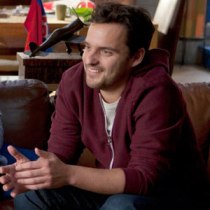 I don’t know what has changed, but in the first season of of New Girl, I could not have cared less about Jake Johnson or his alter ego, Nick Miller.  Don’t get me wrong, I wanted Nick and Jess to fall in love, but I myself could have taken him or left him.

Then this season comes along and everything has changed.  I don’t know if it is a change in my libido or something that the show has done to change his character, but I can’t get enough of him! Anything that comes out of his mouth lately has me rolling.  His delivery is priceless. Take for example his line reading of the word “spectacular” while watching a documentary on turtles.  Slayed me.

Am I alone?  Has something changed?