With an early episode just in time for Halloween, Whitney and Ellen dish on all of their favorite spooky pop culture, including what they put on their Halloween playlists, the first movie to scare their socks off, and who from the horror villain gallery they would prefer to be their murderer.  Plus, Whitney throws out some crazy hypotheticals in a Halloween themed game of Would You Rather!

*NOTE: Listen for the PS at the end of the episode.
You can listen and subscribe HERE on iTunes or you can go HERE to listen and let us know your thoughts in the comments below.

Ever wondered what your favorite live action TV shows would look like as animated cartoons? Yeah, me either. But these cute intros from artist Stephen Byrne kind of make me wish that I had.

Being a Latchkey Kid was the best. My parents both worked full time, so in the afternoons I was left to my own weird devices. It usually went as follows:

1) walk inside, dump my backpack where ever convenient (almost always constituted a fire hazard)

4)Try on all my mom’s old bridesmaid dresses

5) Drink rootbeer out of our fancy dinner glassware and “unwind”

…All of which took about 10-15 minutes. Then it was time to dial into The Gilmore Girls.

There is not one show, not Veronica Mars, not Buffy The Vampire Slayer, not 30 Rock, that means more to me than TGG

Everything I learned about the kind of woman I want to be came from this Amy Sherman Palladino brain baby. (My mom is a super close second). This mother-daughter double act was so funny, so clever, so heartwarming/ breaking that Act 1 Whitney was in perpetual awe. In fact, I can date my media mania directly back to Gilmore. Suddenly there just wasn’t enough of this show to meet my consumption needs.

Lorelei and Rory were so classy,

And then, seemingly out of nowhere, the ax fell.

Gilmore Girls, a network staple and my TV spirit animal, was canceled. It was over almost as soon as it began.

But from the ashes, a hero emerged. One who would help me to piece together the shambles of my Gilmore-less existence, all for the super-low price of $7.99.  That’s right dweebs, Netflix has the streaming rights for Gilmore Girls. Those of us who loved the show will, on October 1, have a chance to relive the magic again and again, and those of you who didn’t love the show will have a chance to pull your head out of your butt. (Sort of joking. Mostly serious).

Give it a chance guys. You will not be sorry.

There has been a recent flood of TV shows adapted from movies with Fargo, About a Boy, Hannibal, and Agents of S.H.I.E.L.D., but cashing in on successful movies is not a new practice.  With that, I give you my top picks for the most successful TV shows based on movies.  Note the word “successful”.  Sorry, Clueless, but there was no room for you on this list.

5. Bates Motel – I have just started watching this one but I feel that it warrants a spot on the list.  It is creepy and cool and stays faithful enough to the spirit of the movie while still striking out on its own.  It is also the only Vera Farmiga vehicle that I have ever been able to get behind because she is just so dang good on it (don’t ask me why, but she has always bugged me in the past.  I just don’t get her). 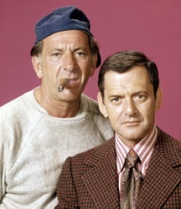 4. The Odd Couple – Honestly, I haven’t seen the movie or show in years.  We’re talking Nick-at-Nite-in-the-90’s years, but I was in the play in high school so it will always hold a special place in my heart.  Tony Randall perfectly takes up the mantel of Jack Lemmon’s Felix Unger and just think about all the successful “quirky roommate” shows that have followed.

3. Teen Wolf – Yes, yes, a controversial pick, but just think about how lame the source material is for this one.  I think it is safe to say that this is one that sounded terrible on paper but has been a pleasant surprise to many.  Of course, it helps that really the only thing that they took from the source material was the title and basic premise that there is a teen and he is a werewolf. Sorry, Michael J. but MTV has got you beat on this one.

2. Buffy the Vampire Slayer – All hail the Joss.  I feel like Whitney and I should be contractually obligated to write that any time we talk about him or his projects, which would be a lot given our proclivity for all things Joss Whedon.  The original movie is pretty awesome (probably because it was written by Joss Whedon) but the TV show was even awesome…er.    With all due respect to Kristy Swanson, Sarah Michelle Gellar’s Buffy was cooler, snarkier, and more kick @$$, all traits that we hold in high esteem here at Fangirly.

1. Friday Night Lights – This is the only show that could take down Buffy and Joss.  Jason Katmis has become the go-to guy for movie to TV show adaptations with About a Boy and Parenthood under his belt, but that is probably because Friday Night Lights was pure perfection.  Another one that sounded potentially disastrous on paper, but succeeded, nay triumphed, because it was more than just a show about high school football.  It was about real people in a real town that just happened to be obsessed with football.  And when I say “real”, I mean they just felt real.  I am sadly aware that Tim Riggins is not real.

What do you think?  Do you agree with my picks?  I wanted to throw an animated pick in there (because there are a TON), but they all felt out of place on the list.

These shows you’ve probably come across,

Written by he who goes by Joss,

Whose cool one can’t define

The Thoroughbred of Sin

And you need not be a super-fan,

To know where Buffy’s been

Since the days of Firefly,

For Fillion we clamour

And I should warn you, by the by

His fist is not the hammer

It’s said that Joss is the nicest guy,

A cab he’ll probably hail ya

Or perhaps the keys for you he’ll buy,

To a Shiny New Australia

He made us fall in love with Spike,

Entertained us through the writers strike,

Which, I hear, they won

And leave you somewhat reeling

And yet I sing his praises still

You know, Once More With Feeling

It officially Halloween season (for us, anyway), and we’re celebrating by naming all of the scariest TV episodes available to stream on Netflix. It wasn’t easy, but we finally narrowed it down to the top five TV episodes that we find totally terrifying.

5) “Home”, X-Files season 4– I don’t know if spooky is the right word to describe this episode about homicidal inbred hillbillys. Revolting, maybe? My official recommendation is that this episode should be watched with a in a well lit room. If this episode teaches us anything, it’s that incestuous weirdos love dark corners.

4) “Family Remains”, Supernatural Season 4– There are plenty of Supernatural episodes we could have gone with, but in the end we settled on this one about a family who moves into a house haunted by a very pissed ghost. OR IS IT?

3) “Hush”, Buffy the Vampire Slayer season 4– For a show about daemons and vampires, Buffy was rarely ever really scary. Here’s one of the best exceptions to that rule. In this episode, all the inhabitants of Sunny Dale lose the ability to speak (and scream) when The Gentlemen come to town.

2) Harper’s Island– It would be impossible to pick one single episode from this awesome murder mystery series, so just go ahead and watch all of it. Because really, nothing says Halloween like a show about a group of strangers trappedon an island with a raging psychopath. Right?

1) “Blink” Doctor Who season 3- We pretty sure that our deep distrust of any kind of carved statue can be traced back to this exact episode. If you do choose to watch this episode, we recommend you stock up on eye drops, because you will never want to blink again.