I present to you: How Guardians of the Galaxy SHOULD have ended.

The readers of this blog can be split into two camps: those who we know in real life and those who we don’t.  I think we are now to the point where we have more stranger-danger-readers, which is awesome!  If you DO know me in person, this will not be news to you because I have not stopped instagramming pictures, but this past week I got a puppy and named him Steve! 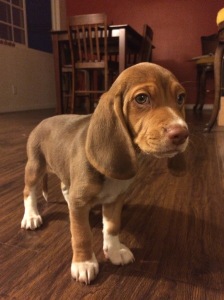 As you can see, he is pretty much the cutest thing ever.  However, he is also a massive time suck so I have had little time to think of anything but dogs.  That being said, I give you a list of my favorite dogs from pop culture.  I know that some of you are going to give me grief for leaving off some of the more iconic pop pups so I have made sure to include them in the honorable mentions.

Honorable Mentions: Pluto, Scooby Doo, Tramp from Lady and the Tramp, Chance and Shadow from Homeward Bound, Hooch from Turner and Hooch, the 101 Dalmatians, Beethoven from Beethoven, Clifford the Big Red Dog, Blue from Blue’s Clues, and Nana from Peter Pan

10. Ren from The Ren & Stimpy Show – Sure, he’s got some anger management issues but I’m pretty sure that I would too if I was always having to put up with Stimpy’s “happy, happy, joy, joy” “eediot” schtick.  I respect occasional control and this is coming from someone who doesn’t usually like chihuahuas. 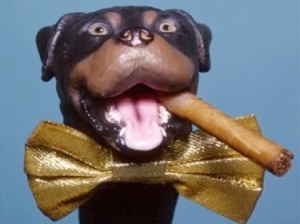 9. Triumph, the Insult Comic Dog – Right along with Ren, Triumph doesn’t take any crap and, in fact, will insult you right to your face.  Whether he is calling out nerds at the premiere of a Star Wars movie or humping fellow dogs at the Westminster Dog Show, Triumph’s humor is always biting and not in the way that is going to get him sent to the dog pound.

8. Snoopy – As my new little buddy is a beagle, I have a newfound respect for this ace flying pooch.  I suppose I have an affinity for wise-cracking dogs because Snoopy is also not a dog to be pushed around.  He isn’t one to take Lucy’s ribbing lying down and he doesn’t have much respect for his owner, but then who does? 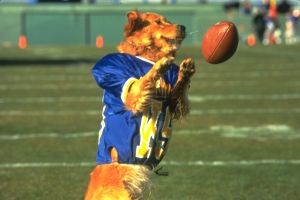 7. Air Bud –  What other dog can play basketball, football, soccer, baseball, and volleyball?  And yes, those are all real movies in which a dog plays all those sports.  That happened. Makes you feel pretty lame about your dog, huh?  Oh, big deal, your dog can play dead?  Air Bud can make the penalty kick that wins the championship game.  Probably.  I don’t know for sure.  I didn’t actually watch any of these movies.

6. Brian from Family Guy – There are few dogs out there with the class and sophistication of Brian.  This dog can croon with the likes of Frank Sinatra Jr., get some serious tail from a myriad of pretty hot chicks, travel through space and time with Stewie, and may someday finish that book he has been working on. 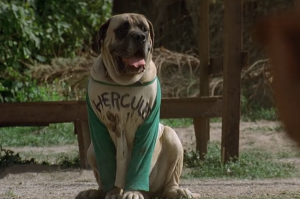 5. Hercules from The Sandlot – The dog, the myth, the legend.  This poor guy gets quite the bad reputation for being a man-eating beast from hell who got locked up FOR-EV-ER when in actuality he is just a protective, slobbery softy with an affinity for baseballs signed by the Great Bambi.  “That wimpy deer?”

4. Dug from Up – There is no other dog in pop culture that more perfectly captures the happy-go-lucky loyalty of real life dogs.  He instantly loves people upon meeting them and he is always on the lookout for squirrels, just like pretty much every dog I have ever met.  Dug and his high tech speaking collar perfectly give voice to dogs everywhere. 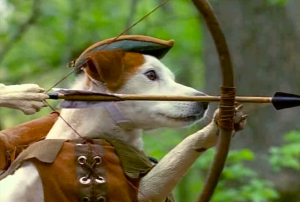 3. Wishbone – This Jack Russel Terrier has played Tom Sawyer, Romeo, Sherlock Holmes, Rip Van Winkle, Mr. Darcy and Ichabod Crane, to name a few.  I would like to see you get that kind of range from another dog, let alone another human.  He’s basically this generation’s Laurence Olivier.

2. Rowlf from The Muppets – I may be in the minority but Rowlf has always been my favorite Muppet, both as a puppy on Muppet Babies (I watched that show so hard as a kid) and an adult dog.  He is a cool cucumber who always keeps it together despite the madcap shenanigans that the Muppets get into.  As long as he’s got his piano and deadpan sense of humor, it’s all good, baby. 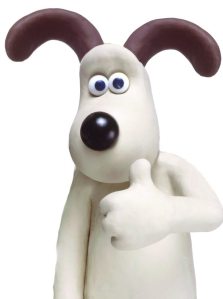 1. Gromit from Wallace & Gromit – I considered naming my puppy Gromit, that is how much I love this claymation pooch.  Gromit is far too wise for his dorky owner but that doesn’t stop him from being a loyal pet.  Gromit faithfully protects Wallace from a thieving penguin, a sheep-napping cyber dog, and a were-rabbit and is still able to kick back and share some cheese with his “old chum”.

I know that nobody is going to agree with me on the ranking, but who is your favorite pop pup?  Feel free to leave comments about how cute my puppy is. 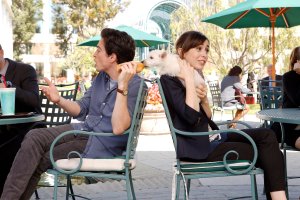 I do love it when a headline has it’s own rhyme scheme. Much farther down on my list of loves, however, are Fall cancellations. That’s not to say that they aren’t a necessary part of the TV circle of life. When shows die, their carcasses are absorbed back into Mother Pop-Culture and are reborn, under the guise of a “new” show. And so it goes; Cheers begets Friends begets How I Met Your Mother begets Happy Endings begets… CSI: New Orleans? Who knows.

While I’ve been pretty satisfied by most of this year’s early cancellations (Bad Judge, Manhattan Love Story), one has lodged itself in my craw. I know that A to Z wasn’t the strongest contender this year. It’s ratings weren’t great and it was, truth told, just another serial rom-com to clutter the bottom of the DVR, but I liked it. Whereas the aforementioned Bad Judge and Manhattan Love Story were fundamentally flawed, I thought A to Z had a lot of potential. Or that it would, at least, outlive that laugh-tracked disaster Mulaney (sorry John). Because it was funny, and it was clever, and it was going somewhere, albeit a little slowly. Apparently that wasn’t enough for the ‘stach twisting, cigar puffing, show slaughtering fat cats over at NBC. So rest in peace, A to Z. We hardly knew thee… RHYME! Sorry, sad again. So, so sad. It really is too bad. More time is what I wish we had.