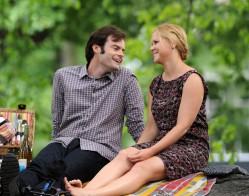 There is nothing like having one of your highschool TV crushes validated on the big screen. When Bill Hader joined the cast of SNL in 2005 I entered a profound state of smit. He was hilarious and, while not conventionally handsome, possessed all the raw sex appeal of a young Bud Cort. It was good. But surprisingly, Hader didn’t gain a lot of traction as a small-screen heart-throb…

You have my permission to be shocked. Astounded, even.

And even though Hader has had awesome supporting comedic roles in a lot of really funny movies (Superbad, They Came Together) he’s never really been able to break into the Leading Man scene. Till now. I’m probably the last twenty-something on Earth to see Trainwreck, and while I had a few issues, I was ultimately won over (hard) by Hader’s Aaron Conners. If I may be so very bold, I would say that this might be the best Leading Man performance in a romcom, ever. I mean that. He is so effortlessly charming and dreamy that for one brief moment I thought to myself “Chris Pratt who?”

(Joking, Chris. You’re my everything).

Anyway, if you haven’t seen Trainwreck, you should seriously consider it. As a film, I thought it was ok. Pretty good, even. But if you want to witness Hader’s historic rise to Christian Slater level dreaminess, you need to see it. You can thank me later.