I think it’s safe to say that I’m not the most committed nerd. I stopped watching Doctor Who after the end of the Smith Dynasty, I’m only mildly enthusiastic about Star Wars, and I just can’t get worked up about comic books, superhero comics in particular. DC, Marvel, Dark Horse, Image. I live and breathe superhero films, but I just can’t seem to work myself up into the same lather over the hard copy.

Maybe it’s the format. There’s a reason why superhero movies are so much more accessible than the cellulose version, right? Comics are a weird blend of a visual and literary medium and, maybe for some, the formula just doesn’t work.

It’s a pretty good theory, with only one massive, gaping hole. My distaste doesn’t necessarily extend to all comics. I love The Sandman, The Pride of Baghdad, V for Vendetta, Maus, Persepolis. All of those stories are great pieces of fiction in their own right. I know this because each one made me cry so hard, you’d have thought I had just watched the end of Stepmom. 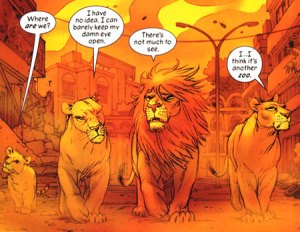 No, it seems like my aversion to comics begins and ends with superhero comics. They just seem so boring. The action, characters, stories all just seem so much more interesting and dynamic in film format. So why does something I love so much on the screen fall so short on the page? SOMEONE EXPLAIN IT TO ME!