Litigation. Corporate buyouts. Company bylaws. If these three words do not turn you on just a little bit, there’s a chance you aren’t watching Suits on USA.  If that’s the case, you have my sincere condolences. Not only have you been missing out on the greatest legal drama to grace the airwaves since JAG, but for the last five years you have been living without this unfairly lofty expectation for how a man should look in a suit.

You also didn’t get to witness Meghan Markle demonstrating how to get it done in heels and a pencil skirt. 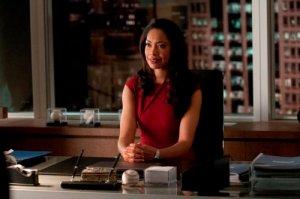 Nor seen the raw, cringe-inducing power of Rick Hoffman as Louis Litt, the stoolie we all hate to love.

And been denied this bromantic buffoonery.

You’ve gone all this time without salivating every time you hear Ima Robot’s “Greenback Boogie”.

Starting to feel a little sorry for yourself? Well, that’s only to be expected. So take a minute, have a good cry. Then you need to dust yourself off and prepare for the binge of your life, because you’ve only got a few hours before the Suits season 5 finale airs on USA tomorrow night. Last one there is a Harold Gunderson!

I DEFY you to name one character on TV this summer, male or female, who has brought it quite as hard as Shiri Appleby on the new Lifetime series UnREAL. The show itself is pretty good, and deeply self-referential in a way we really respond to around here.  And amidst a sea of blonde, busty babes is Appleby’s Rachael Goldberg, a character who can’t be bothered to bathe, brush her hair, or generally give a crap, yet still somehow manages to make ratchet to so, so right.

I’ve responded to this performance in a way I usually don’t. In fact, I’m almost uncomfortable with how strongly I’ve identified with Rachael. First, I need to mention that I own this exact outfit…

I’m also usually in various states of dishevelment, although I have never managed to pull it off quite like Shiri Appleby can. That’s a gift, people. To take a look that is default for most women and turn it up to ten without lifting a finger. It’s nice to see a female character that is allowed to be sexy on her own terms. I bow to her.

It’s also nice to see a woman in TV who’s admired, not because she’s pretty or charming, but because she’s good at what she does, even if that happens to be mass manipulation. Not that Rachael isn’t pretty or charming (some people just walk in the light) but the people on this show rely on her, and defer to her in a way we almost never get to see on TV. If you haven’t see UnREAL, consider this your call to action. This is the performance to watch this year, and if Appleby doesn’t bag herself an Emmy nom, then we live in a world devoid of justice.