I will forever love anything involving Edgar Wright, Simon Pegg, and/or Nick Frost because I love Spaced, Shaun of the Dead, and Hot Fuzz THAT much so it is hard for me to be impartial in this review so I just won’t be impartial and say that I loved this movie and it may not have the perfection of Shaun of the Dead but it was still awesome and hilarious and I loved seeing Pegg and Frost play such different roles from their others in the Cornetto trilogy and Martin Freeman will always be a welcome addition to anything for me.

Verdict:  If you haven’t seen Shaun or Hot Fuzz, see those, then go see this movie! 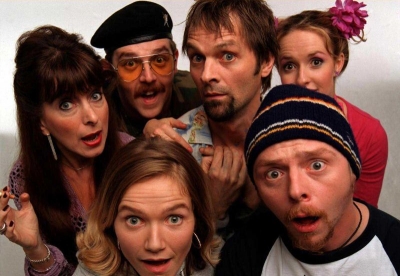 For our inaugural post, we decided we needed to write about something very dear to us.  Something that is an essential for fangirls and fanboys, for that matter.  It is for this reason that I am going to try and convince you to watch Spaced (available on Netflix Instant).

Spaced is written by and starring Simon Pegg (Mission Impossible: Ghost Prots, Shaun of the Dead) and Jessica Hynes née Stevenson (Son of Rambow) and directed by Edgar Wright (Scott Pilgrim, Hot Fuzz, Shaun of the Dead).  Now, in my opinion, all of that should be enough to convince you, but I’ll keep going.

The show centers on Tim (Pegg) and Daisy (Stevenson), two aspiring artists, comic book and writer, respectively, who lie about being a couple to get an apartment.  The initial premise becomes less important as we follow them and their friends on their crazy exploits.  The “crazy” comes less from what they are doing and more from what happens when this group does them, as is evident in the following clip where Tim and his friend Mike (the awesome Nick Frost) explain “male telepathy” and what happens when Tim and Daisy are set upon by a group of ruffians:

The best thing I can equate Spaced to for us American audiences is Community (six seasons and a movie!).  Both shows aren’t afraid of genre-bending here and there, they both find time to focus on the relationships amidst the chaos, and both are aware that we as a society use our shared experiences of movies, TV shows, etc. to communicate.  Take, for example, this clip from the premiere of series 2 that aired the summer after Star Wars: The Phantom Menace came out:

When I sat down to write this post, I was struggling to find a way to sway you readers into watching.  The reality that I had to face is that not everyone is going to love Spaced as much as I do.  Should they?  Yes. But can I make them?  No.  It’s a quirky little show that makes obscure references.  But it is for these reasons that I love it.  There is a moment near the end of the series that references the obscurest of my favorite movies.  I’m talking about Bugsy Malone.  This movie is so far off people’s radars that when I meet someone who has seen it, we become instant friends.  That’s how I know Spaced and I have formed an unbreakable bond and I think that if you watch, you too can find your Bugsy Malone reference.  .