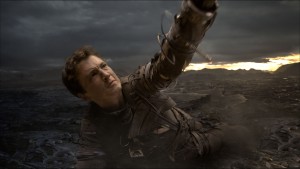 It would be too easy to join the Fantastic Four pile-on. I will be the first to admit that the amount of vitriol being slung at this movie is beyond excessive; an 8% percent on rotten tomatoes should be reserved for Indiana Jones sequels and Michael Bay movies. HOWEVER, this movie is pretty bad, and I’m ready to tell you how, as tactfully as the crappiness of this film will allow. First, though, lets start with what I liked about Fantastic Four.

The first half of the film is, in a lot of ways, pretty good. Reed Richard (Miles Teller) is a Boy Genius who gets recruited to join a prestigious research institute by Franklin Storm and his daughter Sue (Kate Mara). Reed and Sue, joined by Sue’s brother Johnny (Michael B. Jordan *swoon*) and resident vengeful science nerd Victor Von Doom (Toby Kebbell), try to crack inter dimensional travel. This is by far the most engaging part of Fantastic Four, watching these five really smart people work to

accomplish a common goal. We see friendships form and budding romances emerge. Then… they get superpowers.

I’m not going to give you the rundown on the plot of FF, because we’ve seen three of these things already and everybody knows the drill. Through a series of mishaps the titular foursome are endowed with powers they cannot hope to control. This is the point where the film grinds to a halt. The energy of the first act is lost and we are left with four characters who don’t know how to handle each other or themselves.

It’s really not fair to compare this team to the one that preceded it, but I’m going to anyway. The first FF movies were far from perfect, but at least they interacted with one another in a way that was fun to watch. Chris Evans and Jessica Alba bickered like brothers and sisters should; Michael Chiklis and Ioan Gruffudd bro-ed out; Gruffudd and Alba exchanged furtive glances; Chiklis and Evans verbally eviscerate each other. We just don’t get that from this new team. Sue and

Reed’s romance stalls out as quickly as it starts. Johnny and Sue act like two people who’ve never met before but tacitly agree to pretend to be siblings anyway. Johnny and Ben (Jamie Bell) don’t really exchange any dialogue at all until the last thirty seconds of the movie, and the audiences miss out on the antagonistic banter that made their predecessors at least watchable. In the end, what should have brought them together (superpowers) seems to only drive them apart, and they never feel like much of a team.

At the end of the day, it doesn’t seem to matter how bad this movie was because it’s likely that Marvel’s First Family will get a chance to redeem themselves in a sequel. Because that worked out so well the last time.

…And it’s pretty much just as I expected. Reviews have been mixed, but most critics say the reboot hasn’t significantly improved or innovated the franchise. Even before it hit most theaters, the movie garnered a measly 10% on Rotten Tomatoes. A. O. Scott of the New York Times said:

“‘Fantastic Four’, despite the dogged efforts of its talented young cast, has nothing. The special effects are at about the level of the early “Harry Potter” movies — lots of glowing green clouds and ice-blue bolts and force fields. The human drama is meager. Once again, the only real pathos belongs to Mr. Bell’s Ben, who finds himself trapped in a stony new body and weaponized by a ruthless government. Mr. Teller stretches, not as an actor but as a digitally enhanced body. Mr. Jordan burns in the same way, and Ms. Mara disappears. Her character also has the power to make other things vanish. I would say she should have exercised it on this movie, but in a week or two that should take care of itself.”

(Ouch. Here’s a link to the full review in case you enjoy a good crucifixion).

Even though I fully expected to be underwhelmed by this movie, I’m still disappointed. Mostly, I just hope that filmmakers 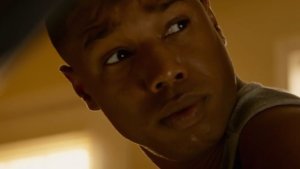 who plan to tackle the superhero genre will take something from this: a story doesn’t necessarily need to be dark and gritty to be complex and momentous. Taking this goofy coterie of heroes and simply mixing in some post-adolescent angst is lazy film-making and, from what I can tell, not very true to the source material. These characters- a stretchy professor, invisible lady, human matchstick, and rock monster- are just too whimsical to be taken so seriously. That’s at least something that the first FF movies, despite their many flaws, understood pretty well.

A full Fangirly review is forthcoming, but in the meantime, tell us what you think in our comment section, on Twitter @fangirly2, or email us at fangirlyfangirls@gmail.com.

There is not one male character in this movie I wouldn’t happily spawn with. And yeah, I’m including Tim Blake Nelson.