Most superhero movies (actually, most movies in general) are more than willing to do the ethical legwork for you. The bad guys (easily distinguished by facial scars, a dark color pallet, or customary bad attitude) are always wrong, and the good guys (identifiable by their steely-eyed commitment to the greater good and general dishy-ness) are always right. Even those films that dip their toes into moral relativism always eventually find their way to the safer, more solid narrative ground of Righteous Hero v. Dastardly Villain. But what happens when everybody looks like a good guy? What is expected of us as an audience when everyone’s actions, including the guy in spandex we came to see, can be understood as right or wrong? For once, maybe the question of morality is open to our interpretation.

Such is the case with the third Captain America stand alone, Civil War. The film opens like 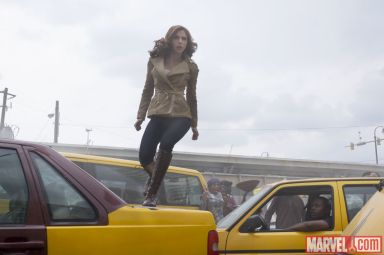 you’d expect: good guys going after bad guys. But when the good guys (here represented by Cap, Black Widow, Scarlet Witch, and Falcon) make a mistake with fatal consequences, there is a global outcry for a little accountability, in the form of UN sanctioned panel that would oversee the Avengers from here on out. Some, like Iron Man, Black Widow, and Vision, see this as a necessary compromise. Others, namely Cap, Scarlet Witch, and Falcon, see it as an undermining of what the Avengers are supposed to be- a group a super friends with the autonomy needed to keep the world safe from handsome alien conquistadors and shapely, artificially intelligent robots. The result can only be described as a, ahem, civil war.

If you’re worried that this movie sounds too much like a talky political drama, rest easy. Civil War has even more than the usual amount of ass-kicking. But what’s really cool about this movie is how the Russo Brothers managed to take out almost all the cartoonishness of superhero violence. There’s a scene, pretty early in the film, where Captain America falls from a ledge and gets beaten around like a rag doll before making an uncharacteristically graceless landing. And, even more surprising, he doesn’t immediately bounce back. Right away we get the feeling that, in this film at least, violence has consequences. And unlike many other action movies of it’s kind, it feels as though the fight scenes are built around the set pieces, and not the other way around. The characters have to adapt to and use their surroundings in a way that makes the idea of a super-soldier and a guy in a cat-suit going at it feel a little more grounded.

Also, I’d like to take this moment to mention Chadwick Boseman’s Black Panther, and

everything I want to say can be summed up in one onamonapia: meow. Seriously, don’t change a thing.

In fact, there isn’t one weak link in this cast. Tom Holland’s Peter Parker is predictably wonderful, Robert Downey Jr. is invariably the coolest guy on screen, and Chris Evans
continues to give Captain America a depth and charm that has managed to turned one of Marvel’s most stoic (and frankly, boring) heroes into a surprisingly relatable  dude.

In this humble Fangirl’s opinion, Civil War is the best superhero movie we’ve gotten thus far. It’s beautifully made, and asks more of its audience than to simply

go along for the ride. You feel obligated to choose a side, and for once, it might not be the same side as the guy with his name on all the posters. Right and wrong is a matter of perspective and actions have far reaching consequences. Does that sound a little familiar?

In case you’ve been living under a literal or metaphorical rock.