Here’s a not-so-secret secret about me: I suffer from sleep paralysis. It’s a sleep disorder that causes the sufferer to maintain consciousness while the body remains asleep, causing temporary immobility. Sounds awful, right? It is. But that’s not the worst part. The worst part is the hallucinations. More often than not I see a dark, menacing, vaguely human shape standing 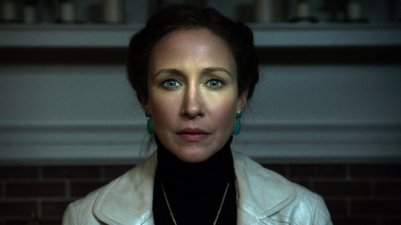 in the corner on my room. Or, if I’m really lucky, I’ll see something waving to me from inside my closet. These experiences are the closest I’ve ever come to pure, mortal terror.

And, for the record, that’s pretty close.

The point of this story is that there is not, nor will there ever be, anything more terrifying than our own imaginations. And I further postulate that there isn’t one filmmaker working today who understands this better than James Wan, directer of The Conjuring 2. He knows how to give an audience a creaky floorboard, an empty rocking chair, and a shadowy presence looming slightly off-screen, and let their brains fill in the gaps.

Farminga and Patrick Wilson as Lorraine and Ed Warren, reputed paranormal investigators. This film, like it’s predecessor, tackles a real-life haunting, the case of the Enfield Poltergeist. In London, a single mother and her four children are terrorized by what they believe is the spirit of the previous owner of their home. Ed and Lorraine travel to England as agents of the Catholic church to determine if the haunting is legitimate.

Vera Farminga and Patrick Wilson are as groovy as ever and their onscreen romance continues to be the beating heart of the Conjuring franchise. Frances O’Connor also shines as the cockney mother at her wits end, as she and her family battle overdue rent, leaky 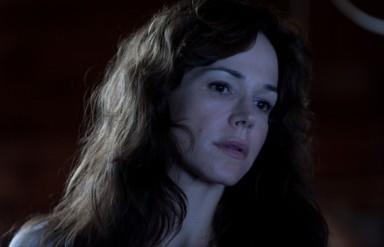 The Hunter. Photo by Matt Nettheim.

pipes, and the forces of darkness.

The best thing about this film is it’s restraint. Wan has a talent for building tension and then letting it diffuse, only to have it build again. It’s terrifying, but not relentlessly so. The audience gets the chance to recover from a scare before another one gets thrown at them.

I think it’s safe to say that the Conjuring franchise is horror for people who don’t like horror. These movies aren’t crude, or gory, or campy. They’re thoughtful and poignant and frequently so scary that half of your time will be spent actively trying to not crap yourself. You know, if that’s something you’re into.

I don’t want to say I told you so, but I totally told you so. In a previous post I predicted that this Jeremy Piven period dramedy was going to rule, and after watching two episodes I can safely say that it does. Here’s why: 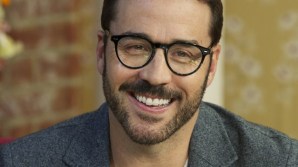 1) An American in an ITV drama? Awesome!

Not only is the titular character an American, he’s played by an American actor. And if there is one thing that we yanks love, it’s outsourcing, making this show something of a win-win for American audiences. Also, can we address how smokin’ hot JP is looking these days? The 20th century is totally agreeing with him… 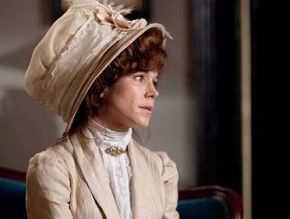 It’s no secret that Frances O’Connor is one of my favorite ladies on Earth (somewhere between Billie Piper and Eleanor Roosevelt). So when I found out that she had a pretty decent sized part in Mr. Selfridge I was pretty much sold. Let me break  it down for you in mathematical terms: Frances O’Connor is wonderful, therefore by the transitive property of TV, this show is wonderful.

I know it’s early days, but I’m finding all the principle characters engaging and (for the most part) likeable. For some reason, I expected this show to be Mad Men: UK, but I couldn’t have been more wrong.I’m not saying that they’re not flawed, but it’s nice to find a show with characters you can actually root for.  Don’t get me wrong, I love a good anti-hero as much as the next single gal, but it’s refreshing to find a show that is going in a different direction.

What do you thing? Agree? Disagree? If you’ve got a comment, I know where you can stick it! (In the comment section…)