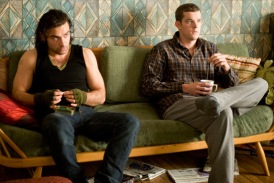 These days, there’s nothing I find more annoying than sexually driven supernatural TV shows (I’m looking at you, True Blood). They are everywhere, and although I remain an avid fan of The Vampire Diaries, I was starting to find the vampire/witch/ghost/werewolf monster-mash melodrama a bit tedious. Then I discovered that there are some shows that are so witty, so well written, and so awesome that they can transcend their spooky, sordid roots. Enter Being Human.

Ok, yes, it’s a show about vampire Mitchell (Aidan Turner), ghost Annie (Lenora Crichlow), and werewolf George (Russell Tovey) cohabitating and trying to navigate their respective supernatural situations. And if that were all there was to it, I would have stopped watching a long time ago. But this British import is also hilarious, sweet, and surprisingly poignant. The best example of this is probably George, who lost his job, his girlfriend, and his family after getting mauled by a werewolf while on a Scottish vacation. Here’s a clip of George going bananas.

This show has experienced quite a shake up since last season, including the arrival of three new lead characters, but I think season 5 is going to rule nonetheless. The first three seasons are available to stream on Netflix, something to keep in mind the next time you get a hankering for quality British TV. Which, of course, is always.