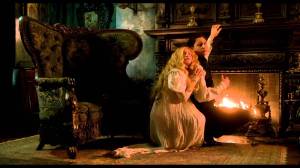 Of any genre, horror is the hardest to get right. Ask anyone who’s ever tried. It’s nearly impossible to find a subject matter that is universally horrifying, so these movies usually end up being shunted into one of many horror sub-genres: slasher, paranormal, psychological. Because of this, audiences are left to pick their poison, so to speak. So when I tell you that I’ve found a near-perfect horror movie, I invite you to take that seriously. 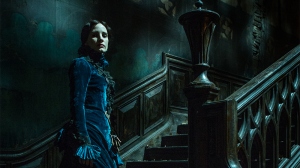 It begins like any Dickensian period piece. Wealthy Edith (Mia Wasikowska) is visited by the ghost of her late mother, and
warned about the dangers of the enigmatic Crimson Peak. As the years go by, Edith forgets the warning and peruses a career as a writer. Her literary aspirations are put on hold, however, when she meets Thomas Sharpe, a titled English gentleman who, as evidenced by his dark hair and habit of lurking in shadowed corners, harbors a secret. Edith is charmed by Thomas and, to a lesser degree, his creepy sister, and agrees to marry him and join him in England. Shortly thereafter, she begins to suspect that her new family has something to hide, and takes it upon herself to figure out what it might be. 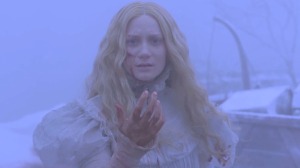 From the beginning this movie cultivates a looming sense of dread. The film makes overt but effective use of color and shadow (you can distinguish the good guys from the bad guys by their hair color, fashion choices, and total amount of screen time spent having whispered conversations in the shadows). Director Guillermo del Toro took what could have been an overdone concept, Victorian ghosts and decrepit haunted houses, and gives it his own spin. The ghosts are actually terrifying, which isn’t something you see a lot anymore.

Tom Hiddleston is here doing what he does best, heating things up with his now trademark blend of sexy and sinister. Also, for anyone who cares (everyone) you do in fact get to see him naked. And let me tell you, it is just as good as advertised. Jessica Chastain also kills it (wink) as the sister and displaced lady of the house. There is so much to love about this movie, even those of us who aren’t hot for horror will eat it up.

So if you’re looking for a movie that will get you into the Halloween Spirit, look no further. Seriously. Hotel Transylvania 2 can wait for Redbox.

One thought on “The Reviews Are In: Crimson Peak”