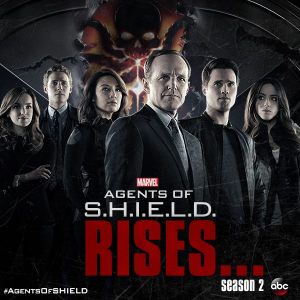 Like a lot of you, I was super excited for Marvel’s Agents of S.H.I.E.L.D because I felt, much like that SNL skit this weekend, that Marvel could do no wrong.  And then like a lot of you, I watched the the first few episodes of the show and wrote it off.  The adorableness or FitzSimmons aside, it wasn’t doing much to keep me invested, but then like a lot of shows, I heard that it got better about halfway through the first season.  As a TV fan, I should have known that it would have, so I gave it another try.

Now that I have caught up, I am ashamed.  I should have had more faith in both Marvel and the wide, wild, world of Whedon because this shiz went bananas. Like, B-A-N-A-N-A-S.

I really don’t want to spoil too much, as this is a post trying to convince you to start watching the show, but I am going to vaguely lay out reasons you should play catch up with this one.

1) Watch if you love the Marvel Cinematic Universe – Again, no spoilers, but the show has set itself up as a pretty fascinating companion piece to all of your favorite Marvel films and seeing as how Marvel seems to be the blockbuster juggernaut that cannot be stopped, I don’t see it running out of material anytime soon.

2)  Watch if you love Whedon – Yes, Joss has a minimal executive producer presence, but his longtime collaboraters and family members, Jed Whedon and Maurissa Tancharoen (they’re married, aww) are the showrunners and all the writers pretty much nail Joss’ tone on the head.  You know the tone I’m talking about?  That mix of cheeky, funny, action-packed, and heartbreaking?  That’s the one.

3) Watch if you love love – Maybe you will like SkyeWard or FitzSimmons or Fitzskye or May and Coulson or MayWard or all of them.  S.H.I.E.L.D has you covered on the sexual tension front and if you like the same couple as me, your heart will be broken when you get to the premiere of season 2.

My feelings exactly.  Who else is excited for “Winter Pam”?