It is the 25th anniversary of the show that is basically the essence of my childhood, Mystery Science Theater 3000.  If you aren’t familiar with this show, I feel very sorry for you.  The basic premise of the show, a man sequestered in space who is forced to watch terrible movies with his robot pals by his mad overlords is unimportant.  All you need to know is that they watch terrible movies and make fun of them the whole time.  It is weird, quirky, and brilliant and narrowing it down to just five was a challenge, but the research was ever so fun.

5) #910 The Final Sacrifice The basic premise is that some whiny teenage kid finds a map left by his dead father and he gets mixed up with a devil-worshiping cult (side note: apparently a lot of terrible movies center around cults). The movie really gets good (?) when the kid gets help from the stereotypical Canadian guy named Rowsdower, a name which the guys can’t seem to get over.  This film lends itself to a lot of major Canada bashing. Best Riff: “Canadian Villain: Garth Vader.” 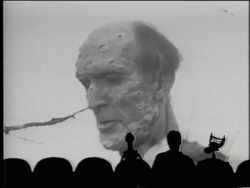 4) #421 Monster A Go-Go Johnny Long Torso, the action figure who comes in pieces, has long been my favorite invention exchange, then you add the “Circus on Ice” short, Gypsy questioning Crow about how she doesn’t “get” him (“Is it that I often panic while making sandwiches?) AND the movie is pretty awesomely bad, too. It is about as bad as you would expect from a 1965 movie about a missing astronaut who has been exposed to radiation  Best Riff: “There is one terrifying word in the world of nuclear physics.” “Oops.” 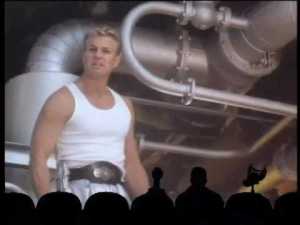 3) #820 Space Mutiny This 1988 movie focuses on, you guessed it, a mutiny in space, but the guys can’t seem to get over the “young” love interest who looks more like a member of AARP, the space commander who resembles a jolly old elf, and the main hero who was obviously not hired for his acting skills.  This is so apparent that the guys have no choice but to spend the movie coming up with names for him such as Punch RockGroin, Gristle McThornbody, Brick Meathouse. or Jack Landhammer.  Best Riff: “Big McLarge Huge”

2) #321 Santa Claus Conquers the Martians The title pretty much sums it up. Emotionless Martians kidnap Santa to bring joy to their children.  Enter a pipe wielding Santa, a bumbling fool of a martian, a coffee can robot, a spaceship that looks like a Simon game, and a truly terrifying man in a polar bear “custume”. This episode has my favorite Satellite of Love scenes between Crow’s Christmas wish to decide “who lives and who dies” and their obsession with having a  Roadhouse inspired “Patrick Swayze Christmas“.  Best Riff: “Crush him!” “You were adopted!” 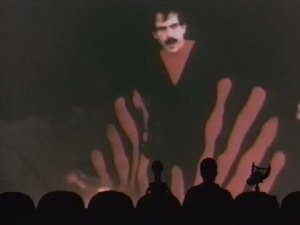 1) #424 Manos: The Hands of Fate Generally considered to be the worst movie ever made, this movie produced by a fertilizer salesman in El Paso, Texas focuses on a family setting off on a vacation when they get mixed up with a “Manos”-centric cult.  Who or what Manos is never really clear, but if you ever wanted to see a movie with a man in a robe with large hand prints, women wrestling in Playtex bras, or a man with watermelons for knees then this is the flick for you. As Joel says, “Every frame of this movie looks like someone’s last known photograph”.  The “Hired” short at the beginning is only the cherry on top of this terrible, gouge your eyes out sundae.  Even Dr. Forrester and TV’s Frank apologize for this one.   Best Riff: “Been hittin’ the Thighmaster, Torgo?”

MST3K fans, did I miss your favorite?  Newbies, did I convince you to watch?

One thought on “Grade A, Choice Picks: Top Episodes of Mystery Science Theater 3000”