There has been a recent flood of TV shows adapted from movies with Fargo, About a Boy, Hannibal, and Agents of S.H.I.E.L.D., but cashing in on successful movies is not a new practice.  With that, I give you my top picks for the most successful TV shows based on movies.  Note the word “successful”.  Sorry, Clueless, but there was no room for you on this list. 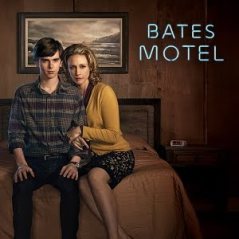 5. Bates Motel – I have just started watching this one but I feel that it warrants a spot on the list.  It is creepy and cool and stays faithful enough to the spirit of the movie while still striking out on its own.  It is also the only Vera Farmiga vehicle that I have ever been able to get behind because she is just so dang good on it (don’t ask me why, but she has always bugged me in the past.  I just don’t get her).

4. The Odd Couple – Honestly, I haven’t seen the movie or show in years.  We’re talking Nick-at-Nite-in-the-90’s years, but I was in the play in high school so it will always hold a special place in my heart.  Tony Randall perfectly takes up the mantel of Jack Lemmon’s Felix Unger and just think about all the successful “quirky roommate” shows that have followed.

3. Teen Wolf – Yes, yes, a controversial pick, but just think about how lame the source material is for this one.  I think it is safe to say that this is one that sounded terrible on paper but has been a pleasant surprise to many.  Of course, it helps that really the only thing that they took from the source material was the title and basic premise that there is a teen and he is a werewolf. Sorry, Michael J. but MTV has got you beat on this one.

2. Buffy the Vampire Slayer – All hail the Joss.  I feel like Whitney and I should be contractually obligated to write that any time we talk about him or his projects, which would be a lot given our proclivity for all things Joss Whedon.  The original movie is pretty awesome (probably because it was written by Joss Whedon) but the TV show was even awesome…er.    With all due respect to Kristy Swanson, Sarah Michelle Gellar’s Buffy was cooler, snarkier, and more kick @$$, all traits that we hold in high esteem here at Fangirly. 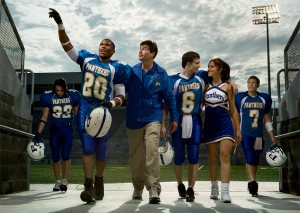 1. Friday Night Lights – This is the only show that could take down Buffy and Joss.  Jason Katmis has become the go-to guy for movie to TV show adaptations with About a Boy and Parenthood under his belt, but that is probably because Friday Night Lights was pure perfection.  Another one that sounded potentially disastrous on paper, but succeeded, nay triumphed, because it was more than just a show about high school football.  It was about real people in a real town that just happened to be obsessed with football.  And when I say “real”, I mean they just felt real.  I am sadly aware that Tim Riggins is not real.

What do you think?  Do you agree with my picks?  I wanted to throw an animated pick in there (because there are a TON), but they all felt out of place on the list.