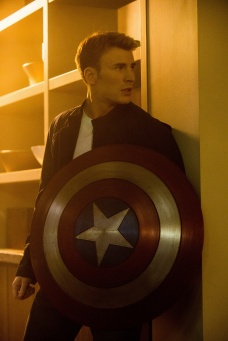 There are so many reasons why Ellen and I could never review movies professionally. Number one has to be the fact that objectivity continues to elude us. No one ever said “Oh, Ellen and Whitney? I know those chicks. They are straight-up dispassionate“. (If you read quote that in Tracy Morgan’s voice, then we are all on the same page). My point is, I walked into The Winter Soldier pretty much determined to love it. There honestly was no possible outcome that involved me not going gonzo over this movie. So you can imagine my relief when it actually turned out to be genuinely good.

Ok, yes it was kinda long and the ending had more set up than an Adobe update and some characters (COUGH Agent Thirteen COUGH) had no reason to be there at all, aside from the aforementioned set up. But honestly, unless you are  Aunt Linda that probably won’t bother you.

It’s hard to synopsize this movie because the potential for spoilers is pretty high. 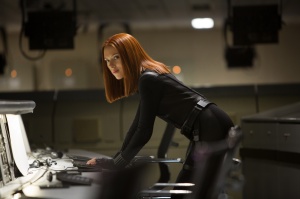 In a nutshell, Cap learns that SHIELD may not be entirely on the up and up, even for a subversive spy organization. That’s his real conflict; the titular bad guy is more of a complication. A super, super hot complication.

This film also had some of the best character moments in the franchise so far. Early on there is a scene between Peggy Carter and Steve that will emotionally decimate you. I mean it. In other great news, we get see Black Widow do more than just kick and quip. The ex-KGB mama jamma gets to finally open up in ways that the other movies haven’t afforded.  She and Cap also punctuate the movie’s many action sequences with some bone-dry banter, most of which is about Steve really needing to get some. (Which begs the question: are we supposed to believe that Steve is still, umm, untapped, so to speak? Exactly how far are we supposed to suspend disbelief!?) Now that Winter Soldier is a record-breaking hit, we can only hope that Captain America is finally feeling the love.

Verdict: I thought it was pretty great. What do you think, Cap?

3 thoughts on “The Reviews Are In: Captain America: The Winter Soldier”