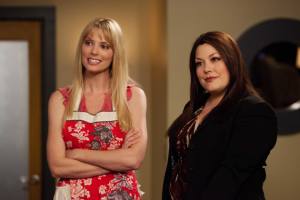 Sometimes I think I might not feel guilty enough about my guilty pleasures. I won’t hesitate to tell someone that I love America’s Funniest Home Videos because watching a dog/grown man fall into a bathtub is HILARIOUS. I also have no compunctions about admitting that I’ve watched Frozen twice since, like, yesterday. So why then do I feel so reluctant to disclose to the nine people who read this blog that I happen to be the most rabid Drop Dead Diva fan in creation? Does it have anything to do with the fact that it airs on Lifetime? No friggin’ doubt. It’s kind of hard to take yourself seriously when your favorite show is preceded by a made for TV movie starring Kristy Swanson and immediately followed by an all new episode of Devious Maids. Or it might be because DDD‘s idea of an exciting guest star is Joan Rivers or Wendy Williams as a saggy expert witness or a sassy judge (respectively). Whatever the reason, I’m usually pretty loath to tell people that watching this show is how I like to spend a Sunday night.

The premise is pretty standard Lifetime fare. Aspiring super-model Deb dies in a car crash and is reincarnated as a plus sized lawyer. Cue the lessons on body image and self-acceptance, right? Well, yes and no. Part of the show’s charm is that it tricks us into thinking that we haven’t seen this all before. It easily could have veered toward preachy and instead gave us a super cool heroine that likes herself as she is. As I write this I realize how much it really sucks that this is a novel concept.

Oh, and it’s hysterical. Balls to the wall droll. Absolutely worth a binge watch, especially now that Netflix is streaming all five seasons. So go grab a Gatorade, call in sick, and make me proud!