When it comes to the Veronica Mars movie, I’m capable of only so much impartiality. This show has been my world since 2004 and objectivity has never been one of my strengths, anyway. But I will try for the sake of the non-Marshmallows out there to give an honest opinion.

Initially, I was really nervous. Ever since the much publicized kick-starter campaign, the expectations for this film adaptation of (empirically)  TV’s best show were unreal. And I would be lying if I said that all my expectations were met. Some of my favorite characters just didn’t get the screen time I felt they deserved, and I felt like the plot was a bit light. But pretty soon, Veronica started digging up Neptune dirt, and all was right with the world. (Seriously, I’m pretty sure the Earth started spinning again.)

Speaking of Veronica, let’s talk about something that sort of did bother me. The end of season 3 left our heroine in a pretty spectacular 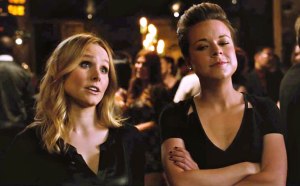 mess. PizMarski’s first sex tape had just gone platinum and Veronica’s father had been charged with evidence tampering (a fact the film conveniently glossed over) after doing just that to cover up yet another one of his daughter’s not-so-petty crimes. Fast forward several years later, and Veronica is now a law school graduate with the bright future fans had always hoped for. That is until murder and potential mayhem bring her back to Neptune and the immediate social circle of one Logan Echolls. Not to give too much away, but the next hour of the film mostly consists of Veronica making several pretty self-destructive choices. Choices, we are led to believe by the 300 substance abuse metaphors, she makes because she just can’t help herself. Now, maybe it’s just me, but I had always given VM more credit than that. To me, her crime-solving relapse felt more like an escape route from real life, perhaps made a little too real by the stable relationship and promising career prospects.

Ok, I realize that all sounded pretty negative, but at the end of the day this was a VERONICA MARS movie. Kristen Bell and

Co. kicked all the usual ass, and the writing was just as awesome as you remember (or don’t remember, if you are one of the aforementioned non-Marshmallows). I loved it, and not just obligatory Fangirl love. This movie was absolutely worth the wait, and totally worth a sequel. And let’s not kid ourselves, there will probably be a sequel.