I want to be clear: I am a huge VD fan. Ellen and I, being the veteran TV watchers we are, managed to crank out the entire

first season in a 24 hour period. At the end of that day I was sure of two things: first, I really, REALLY needed a shower and second, Damon Salvatore was a god. But lately I’ve been feeling a little disenchanted. Here’s why.

5) Can we agree that the vampire thing is a little played out? I mean, after The Vampire Diaries, Twilight, True Blood, Being Human, and Moonlight, I really feel that the sexy-undead-tortured-soul thing has really run its course. This, coincidentally, is one of the dangers of writing a show that’s based on a pop culture fad. All fads end eventually, and all your left with is a series about something that people have seen a zillion times. Hardly innovative, if you ask me. 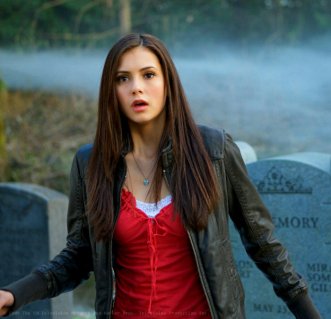 4) Elena is getting on my LAST nerve. I’ve never been a fan of the shows supposedly irresistible heroine. As far as I can tell, the reason people keep falling over her is because she’s really, really pretty. I personally feel that she’s prosaic, passive, and SUPER self righteous. I realize that by saying this I am jeopardizing my relationship with Ellen, the biggest VD fan I know, but honesty is the best policy, right? …Right?

3) The Damon/Elena hook up was less satisfying than I hoped. I guess this really stems back to #4. I just don’t get why a guy who has been around for 150 years is into a teenage ex-cheerleader who spent the better part of the last three seasons boffing his brother. Actually, now that I’m thinking about it… gross…

2) The story is starting to feel a little ‘been there, done that’. I get it. When writing a show that has been running as long as VD, you feel like you’re constantly having to out-do yourself. But I feel that you can only save the world so many times before you start phoning it in. Come on people! Make me believe that you really DO want to avert the apocalypse!

1) Guys, know when to call it a day. After four season of supernatural melodrama I feel like I can’t even follow the

story anymore. Almost every lead character on the show has died at some point, and these jokers have back stabbed and plotted against each other so many times I can’t figure out who’s still on the same side. Frankly, I would rather have the show end now while it’s still a good show than have them drag out this nonsense for another three seasons.

Do you agree? Disagree? Either way, feel free to let me have it in our comment section!