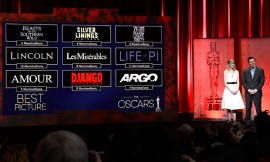 It’s that time of year again, people.  The Oscar Nominations were announced at the crack of dawn this morning by Emma Stone and host Seth MacFarlane.  I thought I would jump on the bandwagon and offer up some of my thoughts on the nominations:

There you have it!  This year should be pretty good.  Not too many sure locks for the winners (which could change as we get closer to ceremony).  And judging from the nomination announcement, Seth MacFarlane is going to be quite the live wire as host.  Check out the video below for some of his and Emma Stone’s zingers.  I’ve also included the full list of nominations.

Best Original Song
“Before My Time” from Chasing Ice, music and lyric by J. Ralph
“Everybody Needs A Best Friend” from Ted, music by Walter Murphy; lyric by Seth MacFarlane
“Pi’s Lullaby” from Life of Pi, music by Mychael Danna; lyric by Bombay Jayashri
“Skyfall” from Skyfall, music and lyric by Adele Adkins and Paul Epworth
“Suddenly” from Les Misérables, music by Claude-Michel Schönberg; lyric by Herbert Kretzmer and Alain Boublil